After having a sift though all that I still have laying around I'm quite pleased to say not a lot has changed in its state of usability.

All of the Asymmetric splices will need rebinding with fibreglass tape in order to be used again as the adhesive has discoloured and given up on most of them. The splices will be re-pressure tested and has a thorough post test examination before being classed as usable again. I am however a little sceptical that they will come through, so in the mean time will start collecting new bottles to create splices with =)

The Launch Pad is in exactly the same state as previously described a year or so ago so this is the first item to be sorted on the agenda.

I must still glue in a bottle cap to the 15mm nozzle piece to create the new larger nozzle.

Until then thank you for reading..

Its been much too long since I've posted anything or made any progress with this hobby (or any of my hobbies for that matter!!) work and a few life hurdles threw themselves in my path over the past couple of years so for that I apologise.

I am here to STAY this time =D!

The plan for the next few weeks are to dig everything out and take a stock check of what is ok and what will need remaking or repairing.

FIRST on the agenda after that is to get the adaptor piece for the launcher on the workshop floor and made either by me or if I don't have the time I will contract the piece out as a long enough wait has grown.

I will make the promise of an update a week until no longer necessary, so watch this space =D

I have so far ordered myself a piece of brass for my adaptor piece described and shown in my previous post, as well as the necessary M14x1 fine thread tap and die to create the threaded section.
I have also found, thanks kindly to my friend Ian who has said i can use his workshop, a place to machine the parts in question. 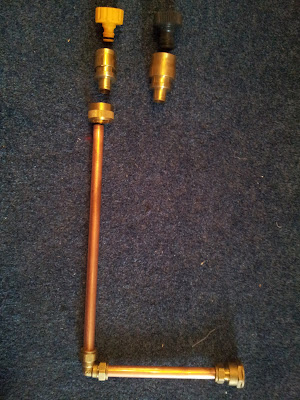 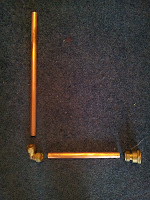 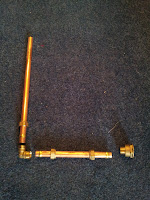 I have already however made progress on the pressure delivery pipework for the launcher but can do no further work to it until the adaptor piece is made and the upright pipe soldered to it.

I have been working on updating the launcher for a while now but only recently taken any action.

So first place to start, the strip down of the launcher, for now all I have taken off is the launch stanchion this is because the first problem to be solved is that of making the release heads interchangeable. 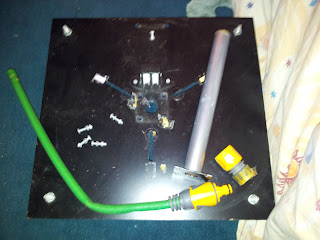 The plan is to make an adapting piece that will sit atop the stanchion and have the 15mm copper tubing soldered into the bottom, then attaching the release head will use the quick connectors own threaded locking ring. 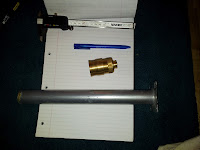 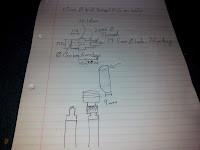 Above pictures show the design breakdown and internal details of the piece to be made, this piece will allow us to swap between the large and small diameter nozzles very quickly with no tools required. I'm sorry if details given seem vague and do not give a great visualisation as to how exactly this piece will work but there's no easy way to explain it other than wait to see the finished piece.

This is all the updates to show for the launcher so far.

A few other bits and bobs I'm going to be getting on with in-between working on the launcher are, more parachutes (1x75cm, 2x100cm and 2x150cm), the recovery line accessories e.g. the shock cords and securing lines. Work has also begun in making a streamlined parachute pod but more on that at a later date as nothing will be able to be launched until the pads completion.

Thank you for reading